7 More Thanksgiving Reminders of How Damn Lucky We Are 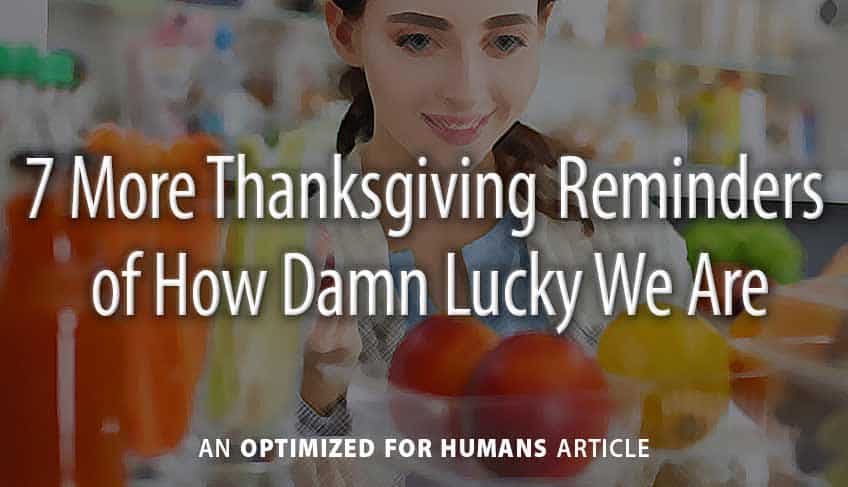 How would you get ready for work without indoor plumbing? In last year’s post of deep-dive thankfuls, hot showers were one of the highlights. It’s funny, so much stuff we naturally take for granted came along not long before we did. The more I’ve looked around, the longer my list becomes.

So join me for another peek through the lens of history, at the essential perks that our circumstances and social systems provide. None are close to perfect, yet life without them would be grim indeed. They’re just a few of the ever-evolving blessings from ancestors who navigated the long, bumpy road toward progress.

1 Peace  We live in historically peaceful times, despite local conflicts that still erupt here and there. Before WWII, no one was safe from empire-building nations and tribes, who got a kick out of storming in and tearing up other people’s neighborhoods. Today, international alliances mostly keep rogue warmongers in line with threats of a unified response.  Study question: If a violent occupying army from another culture seized your entire city, who would you complain to?

2 Prosperity  Sure, we could all use more money. But let’s keep that within the context of a remarkably high standard of living, again, historically speaking. In enjoying life’s comforts and cultural bounty, today’s middle class has more in common with the wealthy nobles of the past than the drab mass of commoners they lorded over. Study question: How long would you last with no money – and no social safety net?

3 Privacy  It may come as a surprise that the very expectation of personal, physical privacy is a relatively new notion. From caves to mud shacks to woodland cabins, one-room dwellings were pretty much the rule. At night, an entire extended family lay nearby while a couple was busy adding to the clan. Study question: Would you miss your privacy if you never had any in the first place?

4 News  Ever since civilization crawled out of the Dark Ages, people have been curious about the forces and events in the world around them. The more legitimate news outlets evolved as the eyes and ears of an engaged society. They also evolved as a crucial counterbalance to leaders and governments that seemed to forget who they were supposed to be serving.  Study question: Would you still watch the news if, as in some other countries, it was run by the government?

5 Diet  A woman who visited from Russia in the 1960s couldn’t stop talking about how everything was bigger and better in her home country. Then someone took her to an American supermarket, aisles bursting with overwhelming variety. The woman stopped, looked, and began to sob. The next time we complain about not enough space in the fridge, we should consider the billions of people throughout history who would gladly swap problems with us.  Study question: Some of our forebears had only two or three basic foods to work with; which ones would you choose?

6 Healthcare  What if your chest pain was diagnosed as punishment by angry spirits? Even up until the mid-1800s, much of what passed for medical treatment now seems so horridly appalling, I won’t disgust you by offering examples. Since then, advances in antibiotics, anesthetics, antiseptics and more no longer make a visit to the doc the biggest threat to your health.  Study question: How sick would you have to be to allow surgery without anesthesia?

7 Regulation  Personally, I’m delighted to know that someone has an eye out for keeping insect parts out of my breakfast cereal. Yeah, I know, ewww, but the disturbing varieties of negligence from corner-cutting companies are what prompted the first regulatory laws in 1887. The idea of consumer protection emerged in 1962, but it’s had to compete politically with efforts to protect business instead.  Study question: How many risks can you list if there were no government regulations at all?

By a twist of fate, you or I could have been born in another time, in another place, fending for ourselves in ways we cannot now imagine. From that perspective, it’s a luxury for our modern selves to spend time on so many activities unrelated to survival.

Of course, flipping through the options on Netflix would take on a different context if a bombing raid was rattling your house. On the other hand, deciding what to make for dinner would be easier if all we had in the kitchen was rice.