‘StoryBrand’ Is Smart, Insightful and On-Target. Except for One Thing. 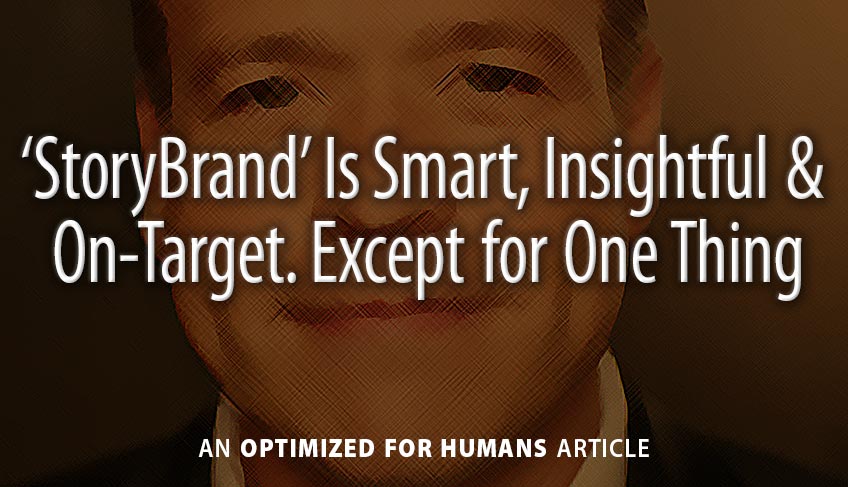 Bravo for Donald Miller’s popular business book Building a StoryBrand. It’s given thousands of companies and web/marketing agencies a strategic foundation, in the form of a simple, handy ‘Framework’ for sales messaging. That is a good thing, and sorely needed. If you haven’t read the book, you should.

Miller’s initial effort has since grown into a media, business and certification empire. Along the way, it’s sparked a widely popular movement within the business world that is only a little bit cultish.

Unfortunately, the name StoryBrand has led many to think it’s all about creating a ‘story’ about their ‘brand,’ when in fact, it is the exact opposite. As Miller himself wisely and repeatedly points out, his template is for creating a story about the customer’s journey, from the customer’s point-of-view. A story in which the happy outcome always springs from the seller’s product or service.

But that’s not even the issue I want to talk about today. I’m stuck on something about the StoryBrand framework itself. No, it doesn’t escape me that Mr. Donald Miller has become far more wealthy, famous and influential from his ideas than I could ever hope to be with mine. So I’m guessing that he doesn’t particularly care what I think.

To be fair, any approach, framework, or theory is, by nature, simply an abstraction. It may include worthy and insightful elements, but alone, it can only tell part of the proverbial story. In order to be simple enough to absorb, no mental model can include every possible consideration.

With that said, let me spell out Miller’s seven-part “SB7” framework here, with key terms in bold:

1 A character 2 has a problem 3 and meets a guide 4 who has a plan 5 and calls them to action 6 that helps them avoid failure 7 and ends in success.

Makes sense, right? The core point of this approach is that it is not the company playing the role of the hero, it’s the customer. The company plays a key role as the guide, but it is merely a supporting one. Counterintuitive perhaps, to all the firms who have pursued the highly popular yet highly ineffective “all about us” approach to marketing.

But here’s where I think Miller’s Framework misses the ‘nut’ of the matter.

That thing we want is the shining star that guides us as we compare the options, research the relevant details, make our decision, and plan our purchase.

So, why is that story element totally missing from the StoryBrand framework? If it were truly reflecting the customer’s experience, that thing should be the central element of the story. The ‘problem’ Miller mentions only exists as the absence of that coveted whatever-it-is. His ‘success’ only exists in terms of the thing’s acquisition. His ‘guide’ and ‘plan’ are only relevant as means to an end.

I could point out a few more tweaks that I think would make the official Framework more useful and accurate. But I don’t want to tick off the StoryBrand faithful any more than I already have.

Instead, I’ll include a link to a StoryBrand Certified marketing agency that helpfully explains How to Get the Most From the SB Framework – but is also clearheaded enough to point out Where the StoryBrand Framework Falls Short.

And for those of you who cynically suggest that I’ve written this post simply to grab some ‘StoryBrand’ SEO juice for my own site and business, let me be clear that that wasn’t the original reason for this topic.

But if it turns out I get any benefit at all, I really don’t think Donald Miller will lose sleep over it.

Looking for the StoryBrand treatment, but not the cookie-cutter approach? Let’s chat about it.