Web Writing And The Amazing Power of Strategic Questions 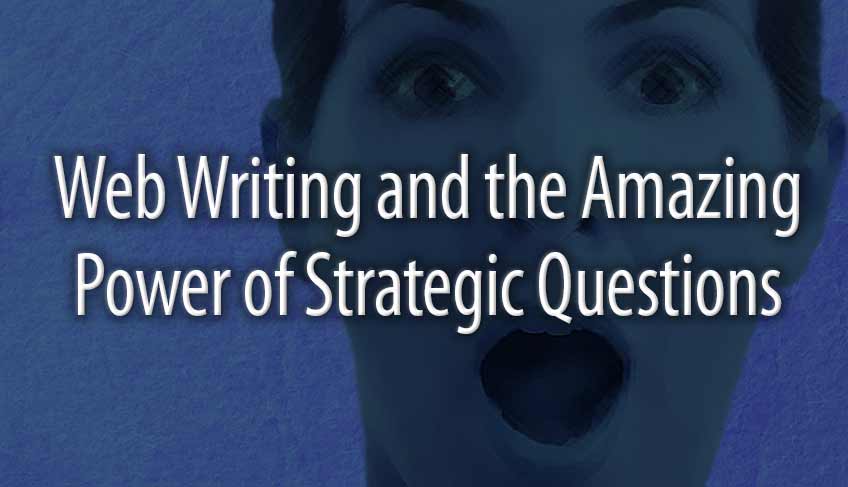 People, as a whole, don’t like to be told what to do. Do you?

Yet web writing on business sites is typically focused on … telling people what to do. Buy now. Click here. Fill out a form.

Is there a better approach? Would I be asking if there wasn’t?

The idea here is to engage viewers by asking them a question in a way that allows them to connect the dots, and come to their own conclusion about what’s best for them.

Which of course also turns out to be best (financially) for the company that’s asking the question.

Let’s say we’re doing web writing for a chain of service stations that change the oil in your car, but also perform a variety of other automobile maintenance tasks.

As an insider, you know that oil changes aren’t necessarily that profitable, but since they’re necessary, it’s a good way to get customers in the door. The real money is made when your technicians find other (more profitable) car maintenance issues that need tending to.

So you can try to sell your services by saying, “Get a 28-point car maintenance inspection with your oil change.”

To which I might reply, hey, don’t tell me what to do.

But what if the headline read something like this:

“Do you know the 28 critical maintenance areas that keep your family car safe?”

To which I can only reply, “no.” This sets up something called cognitive dissonance (remember that term from freshman psych class?). There’s now a mental split between two ideas: I want my family to be safe on the road, and, I don’t personally know how to ensure that.

This psychological pebble-in-the-shoe is annoying, and disturbing, and can only be resolved by what?

By pulling into to that service station and having them do their safety check while changing the oil on my car.

The point is, I came to that conclusion myself. It’s something I wanted (even though it might not have occurred to be before). All the seller did was ask a question. That’s the power of smart marketing.

Let’s say you have a cloud backup service. For safety’s sake maybe you back up your customers’ data on half a dozen servers around the world, whereas most of your competitors back up to just one.

The old web writing approach might be, “Choose the company that provides multiple backup servers.” (Arrgh, don’t tell me what to do.)

The new, strategic-question approach might feature the headline, “What happens if the backup server you’re on fails?” The sub-head could be, “Be sure your irreplaceable data is safe on six separate servers.”

The other important difference here is that the old option is about some company who’s trying to sell me something. The new option is about me, and my data, and the gutwrenching feeling in my stomach at the mere thought of losing all my business files or personal photos.

When I mentally connect the dots with regard to what’s best for me, choosing your backup service now seems like a no-brainer.

Now, there is a question you do commonly see on websites,

But in no way, shape or form is it a strategic question: “Why choose us?”

That query is always followed by a bullet point list of what the business considers its advantages. The problem is, both the question and most of the answers that follow are company-focused rather than customer-focused.

And customers care about themselves a lot more than they care about your company. Sad, but true.

A better way to handle the web writing here is to make the headline, “What’s most important to you about (whatever the topic is)?” The bullet points likewise would be re-oriented as customer benefits rather than company features.

Again, it’s a smarter approach to web writing, since asking a question that’s relevant to the buyer’s own interests is naturally more engaging for the buyer. It encourages them to think about how the issues listed affect them, which makes the company’s solutions all that much more meaningful.

Seen through this lens, an overall survey of business websites out there reveals an all-to-common, inward-focused superficiality.

Look, in the end, I’m not telling you how to craft your own website or other marketing. I’m just asking a question: “Do your prospects want to be told what to do, or do they want to come to their own conclusion that you’re their perfect solution?”

Sign up for the Optimized for Humans blog, and get a free mini-review of your very own home page. You may be surprised what you learn. 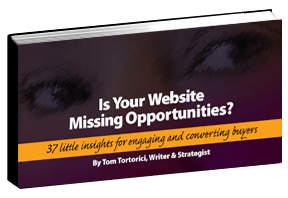 Bonus: Include your website URL if you’d like a free review of your home page. I’ll send you 3 custom ideas to better connect with your buyers.